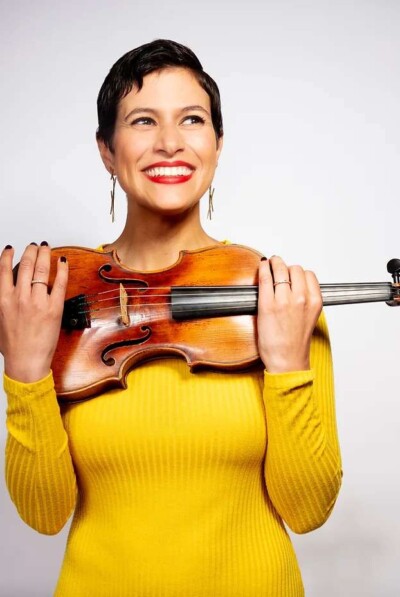 Elena Urioste is a musician, yogi, writer, and entrepreneur, as well as a lover of nature, food, animals, and connecting with other human beings.

As a violinist, Elena has given acclaimed performances as soloist with major orchestras throughout the United States, including the Philadelphia, Cleveland, and Minnesota Orchestras; the New York, Los Angeles, and Buffalo Philharmonics; the Boston Pops; and the Chicago, Boston, Dallas, San Francisco, San Diego, National, Atlanta, Baltimore, and Detroit Symphony Orchestras, among many others. Abroad, Elena has appeared with the London Philharmonic, Hallé, Philharmonia, and Royal Liverpool Philharmonic Orchestras; the BBC Symphony, Philharmonic, Scottish Symphony Orchestra, and National Orchestra of Wales; the Orchestra of Opera North; as well as the Chineke! Orchestra, Malaysian Philharmonic, Orchestre National de Lille, Edmonton Symphony, Würzburg Philharmonic, and Hungary’s Orchestra Dohnányi Budafok and MAV Orchestras. She has collaborated with celebrated conductors Sir Mark Elder, Yannick Nézet-Séguin, Vasily Petrenko, Christoph Eschenbach, Robert Spano, Karina Canellakis, and Gábor Takács-Nagy. She has regularly performed as a featured soloist in Carnegie Hall’s Stern Auditorium and has given recitals at the Wigmore Hall, Carnegie Hall’s Weill Recital Hall, Kennedy Center, Konzerthaus Berlin, Sage Gateshead, Bayerischer Rudfunk Munich, and Mondavi Center. Elena is a former BBC New Generation Artist (2012-14) and has been featured on the covers of Strings, Symphony, and BBC Music magazines.

Recent musical highlights include the release of two new studio albums with pianist Tom Poster, THE JUKEBOX ALBUM and From Brighton to Brooklyn, released on Orchid Classics and Chandos Records, respectively; as well as critically acclaimed debuts with the Dallas and San Diego Symphony Orchestras. Upcoming engagements include a debut at the BBC Proms with the City of Birmingham Symphony Orchestra, a residency at the Aldeburgh Festival, and a Norwegian debut at the Bergen International Music Festival. 2022 will see the release of two new studio albums for the Kaleidoscope Chamber Collective: a disc of Samuel Coleridge-Taylor’s Nonet, Piano Trio, and Piano Quintet; and an album of lesser-known chamber works by Fanny and Felix Mendelssohn, both for Chandos Records. Elena will also feature as soloist on Max Richter’s The New Four Seasons: Vivaldi Recomposed, recorded on period instruments; and in Samuel Coleridge-Taylor’s Violin Concerto and Romance, to be released on Chineke! Records this summer.

An avid chamber musician, Elena is the founder and Artistic Director of Chamber Music by the Sea, an annual festival on Maryland’s Eastern Shore. She has been a featured artist at the Marlboro, Ravinia, La Jolla, Bridgehampton, Moab, and Sarasota Music Festivals, as well as Open Chamber Music at Prussia Cove, the Cheltenham Music Festival, Switzerland’s Sion-Valais International Music Festival, and the Verbier Festival’s winter residency at Schloss Elmau. Elena has collaborated with luminaries such as Mitsuko Uchida, Kim Kashkashian, and members of the Guarneri Quartet, and performs extensively in recital with pianists Tom Poster and Michael Brown. She is the co-director of the Kaleidoscope Chamber Collective, appointed Associate Ensemble at Wigmore Hall in 2020.

Elena is a graduate of the Curtis Institute of Music and The Juilliard School. Notable teachers and mentors include Joseph Silverstein, David Cerone, Ida Kavafian, Pamela Frank, Claude Frank, Choong-Jin Chang, Soovin Kim, and Ferenc Rados. The outstanding instruments being used by Elena are an Alessandro Gagliano violin, Naples c. 1706, and a Nicolas Kittel bow, both on generous extended loan from the private collection of Dr. Charles E. King through the Stradivari Society of Chicago.

Elena has been practicing yoga since 2009 and received her RYT-200 hour certification from the Kripalu Center in June 2019. She is the co-founder of Intermission, a program that combines music, movement, and mindfulness, aiming to make music-making a healthier, more holistic practice for students and professionals alike through yoga and meditation.

Miscellaneous accomplishments include first prizes at the Sphinx and Sion International Violin Competitions; an inaugural Sphinx Medal of Excellence presented by Supreme Court Justice Sonia Sotomayor (they immediately bonded over their matching red formalwear); a 2022 BBC Music Magazine Award for THE JUKEBOX ALBUM; spreads in Latina and La Revista Mujer magazines; a 2020 Royal Philharmonic Society “Inspiration Award” and a 2021 RPS Enterprise Fund Trailblazer Grant for her #UriPosteJukeBox project with Tom Poster; and the 2015 Brooklyn Film Festival’s Audience Choice and Best Original Score awards for But Not For Me, the independent feature film in which Elena acted as the lead female role. Writing is another passion for Elena — you can find many of her musings on her website’s blog.

In addition to her love for hiking in lush forests, swimming in the ocean, and marveling at the stars, Elena’s heart melts around corgis, vibrant vegetarian and southern Italian cooking, and beautifully crafted literature. She enjoys knitting the occasional scarf to keep her fingers busy on airplanes. Finally, Elena believes that we should all strive to spend less time looking at screens, that Oxford commas should be required, and that people should clap whenever they feel moved to do so during concerts. 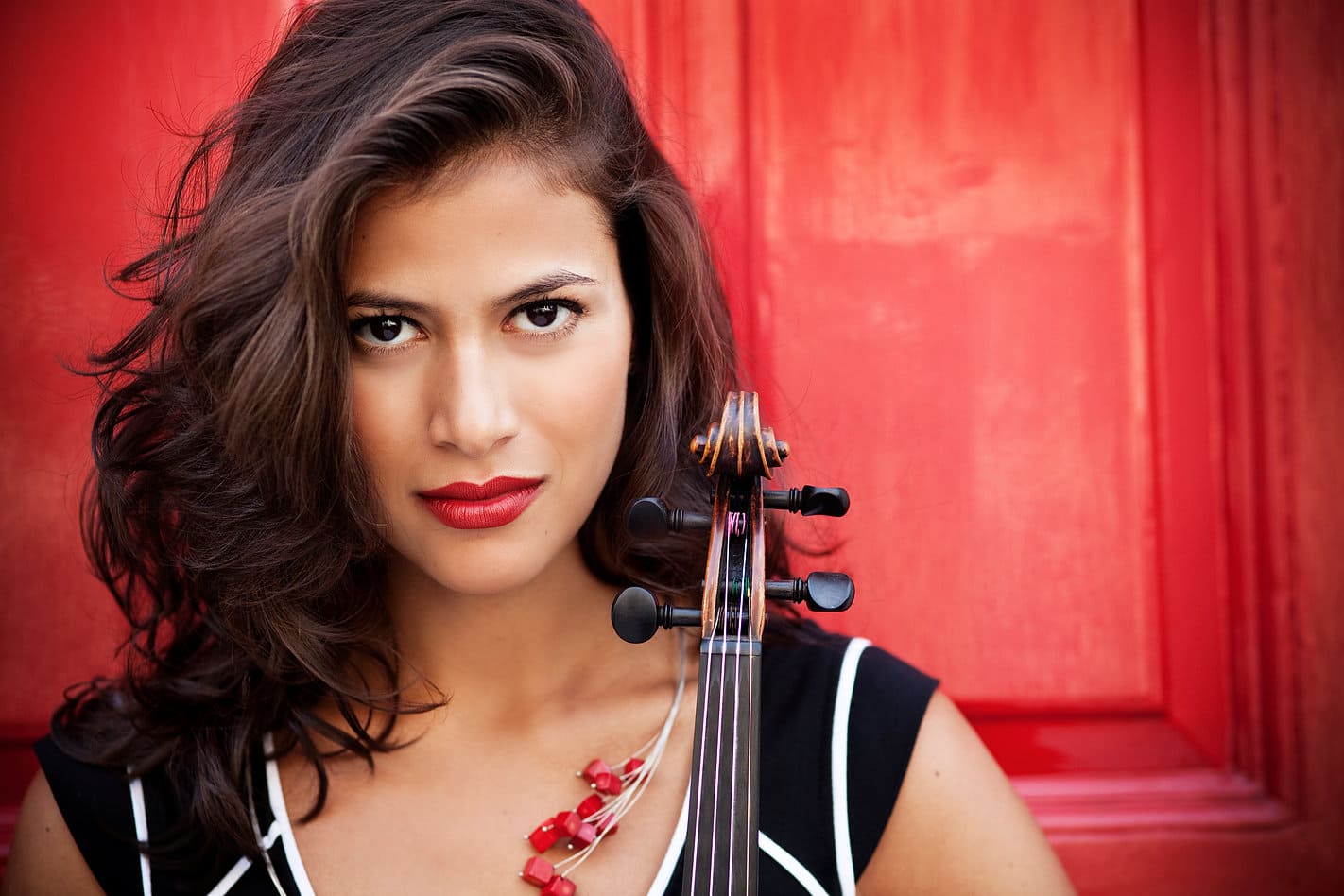 An innovative program that combines body, mind, breath and music through yoga and meditation. All musicians, regardless of their level, can begin to rebalance body, mind and emotions so that music making becomes a complete, healthy and joyful experience.