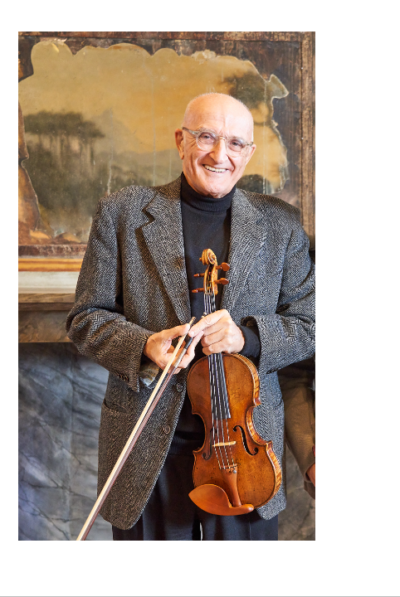 Salvatore Accardo is one of the most prestigious soloists on the international music scene.

Born in Turin in a family coming from the South of Italy, his father Vincenzo, artist engraver of cameos, was passionate with music and his mother was a primary school teacher.

At 3 he asked for a violin and began to play to ear and at 5 he began his studies in Naples with the musician and pedagogue Luigi D’Ambrosio. Later he entered the Naples Conservatorio of San Pietro a Majella where at 13 he graduated  full marks playing for the first time Paganini’s Capricios.

When 17 Accardo won in Genoa the Paganini Competition starting immediately after his prodigious international career. Since then, he did concerts in all the more prestigious international halls, playing with the most important orchestras and conductors: Carlo Maria Giulini, Claudio Abbado, Riccardo Muti, Yuri Temirkanov, Colin Davis, Kurt Masur, Charles Dutoit, Lorin Maazel, Sir John Barbirolli, Kirill Kondrashin, Antal Dorati and many others.

He has a huge repertoire and many important composers as Sciarrino, Donatoni, Piston, Piazzolla, Xenakis, Vacchi and Colasanti wrote violin pieces for him.

In 1971 Salvatore Accardo created the Festival “Le Settimane Musicali Internazionali” in Naples, where the audience for the first time could attend also the rehearsals of the concerts. In the following years he created also the Cremona Festival entirely dedicated to strings.

In Genoa, on October 27th 1982, 200th birthday of  Niccolò Paganini, Accardo played his 24 Capricios on the “Cannon”, the Guarneri del Gesù violin of Paganini and did the Capricios on this violin in many other towns.

He made his debut as conductor in 1987 and since then he conducted operas in the Rome Opera Theater, in the Monte Carlo Opéra, Lille Opéra, in the San Carlo Theater in Naples, at the Rossini Festival in Pesaro, collaborating with the directors Roberto De Simone, Jean-Pierre Ponnelle e Costa-Gavras.

His passion in chamber music and in helping young talents pushed him in creating in 1986 an Academy in Cremona where young talented strings students could improve for free after graduating: the Fondazione Walter Stauffer in Cremona, founded together with the violinist Bruno Giuranna, the cellist Rocco Filippini and the double bass Franco Petracchi .

In 1992 Accardo created the Accardo Quartet and 4 years later he founded a string orchestra made by the best pupils and former pupils of the Stauffer Academy: the Orchestra da Camera Italiana in which the musicians  – only case in the world – are all from the same school , achieving an uncommon unity of expressiveness, style and technique. Salvatore Accardo with his Orchestra da Camera Italiana extensively recorded and made many national and international tours, creating also what became a tradition: a concert every year in the Italian Senate Hall.

Salvatore Accardo won many international prizes and honors: in Italy the Abbiati Prize of the Musical Critics for his outstanding career; the “Cavaliere di Gran Croce” the highest Italian honor; the “Commandeur dans l’ordre du mérit culturel”, the highest honor of the Principauté de Monaco, the Prize “A Life for the Music” and has been named “Most Honorable Professor” in Beijin Music School. In June 2017 he has been awarded the 2017 Kennedy Center ICA Gold Medal in the Arts. 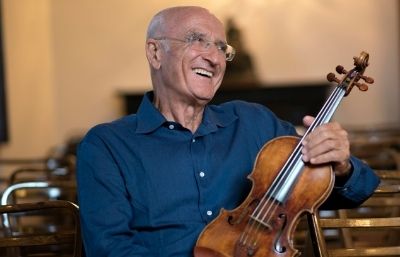 The high specialization course – Stauffer Artist Diploma in Violin of the Accademia Stauffer is an annual program for gifted and talented young musicians.

Being here is a dream come true.